I’m always looking for new and exciting places to go on quick weekend backcountry trips. After visiting the Massasauga Provincial Park, Haliburton Highlands, and the Canoe Lake access point in Algonquin numerous times, I was searching for a different fun area to explore. My requirements were that the trip had to be a maximum three-hour drive away from our home in Toronto, less than 10km of paddling and portaging to reach a campsite, and preferably Crown Land or in an unmaintained provincial park (free camping is a major bonus). It seemed like a tall order at first, until I put in a request on the forums at My Canadian Canoe Routes for advice. The response was overwhelming! After much deliberating, I decided on a little-known route just outside of Cottage Country in Muskoka, easily accessible from a government dock, no camping fees, and only a two-hour drive from our front door.

The Severn River is a major waterway in Southern Ontario. It’s an extremely popular cottage area, and Andrew and I have driven past it thousands of times on our quests for adventure. After driving for about twenty minutes just off the highway, we arrived at the government launch at Morrison Landing, parked the car, and loaded up our canoe for a quick and easy getaway.

We were unsure if we had to pay for parking or not, so we inquired at a cottage resort near the put-in. Nope! Free parking, and no launch fees. This was getting better and better. Before we set off we checked out the map I had printed off (kindly supplied by a member of the canoe routes forum) and decided to just quickly get to the first camping area off the river as it was already about four p.m.

We passed many cottages on our way down the wide, welcoming river. I enjoyed seeing cottages that blended in with the landscape, as opposed to the McMansions that are becoming so prevalent across the rest of Muskoka. The cottagers and boaters we passed were all very friendly, waving to us and saying hello as we paddled by.

After a short, roughly 5km paddle, we began looking for our first portage off the river. We weren’t sure if the portages were marked or what shape they would be in, and although there was no sign or flagging tape, the path was so wide and well-traveled that we noticed it from almost a kilometre away. This was a very easy portage! The trail was at least 2m wide over gently rolling terrain, which was a breeze after the difficulty of the portages we experienced in Temagami a few weeks before. We estimated the distance to be about 300m (my map did not give any information on the length of the portages, just an indication of where the trail was supposed to be) and completed a double-carry in no time flat. There was a cached aluminum boat at the put-in to the marsh, probably left there by cottagers accessing the area for fishing.

i’m such a tough guy

Weir’s Marsh would be a nightmare in early
and mid-summer. But, as it was September
and we had no bugs to contend with, we appreciated the beauty of the wetland as we paddled through. Saw many Great Blue Heron nesting sites, flushed a few herons and ducks out of the reeds, and didn’t get stuck too deep in the mucky bog. The marsh was probably only a kilometre long, maybe two, tops, and we made it to the next portage only a few minutes later. The second portage was even easier and shorter than the first.

On the far side of the second portage, we spied four more cached boats and a lonely green canoe. This was obviously a very popular destination, but we didn’t really realize HOW popular until we pulled ashore at the first campsite on Rat Lake. What a nightmare. There were decades-worth of garbage piling up in the bushes: old two-burner Coleman stoves, rusty tin cans, mouldy tarps, a decaying PFD, stubby brown beer bottles, fuel canisters, shitty plywood tables nailed to trees, a pair of boxer-briefs, etc. It was depressing. We guessed that local cottagers or fishermen just kind of treated the area like their own personal “Back Forty” or landfill, and that’s where their old camping gear was sent to die.

Luckily, there was another campsite marked on our map across the lake, so we paddled across to check it out. As is usually the case, this site was in much better condition than the first, more easily-accessible campsite, and within a minute we were set on staying and spending the night. The only garbage on the north end of the lake was one partially burned tea bag in the firepit, and we quickly forgave whoever stayed there last for leaving it behind considering the atrocities to nature committed by campers on the other side.

room with a view , rat lake

Our tent was set up in a matter of minutes and I had dinner on the go soon afterwards. I had decided to keep it an easy affair of dehydrated pulled pork and refried bean burritos because I still had many dried meals kicking around the freezer at home. Dinner did not disappoint, especially as it was accompanied by a few beers (no can ban!) and one of the most beautiful sunsets we had seen all summer. We were the only people on the lake. We marvelled at how easy it was to access such a beautiful, private spot, until we were reminded of civilization by a noisy passing train. The trains faithfully chug-chugged by every hour or so, and every time one of us would hear it, we would say, “Think that’s a train? I think I hear a train,” which seemed more hilarious with each repetition. 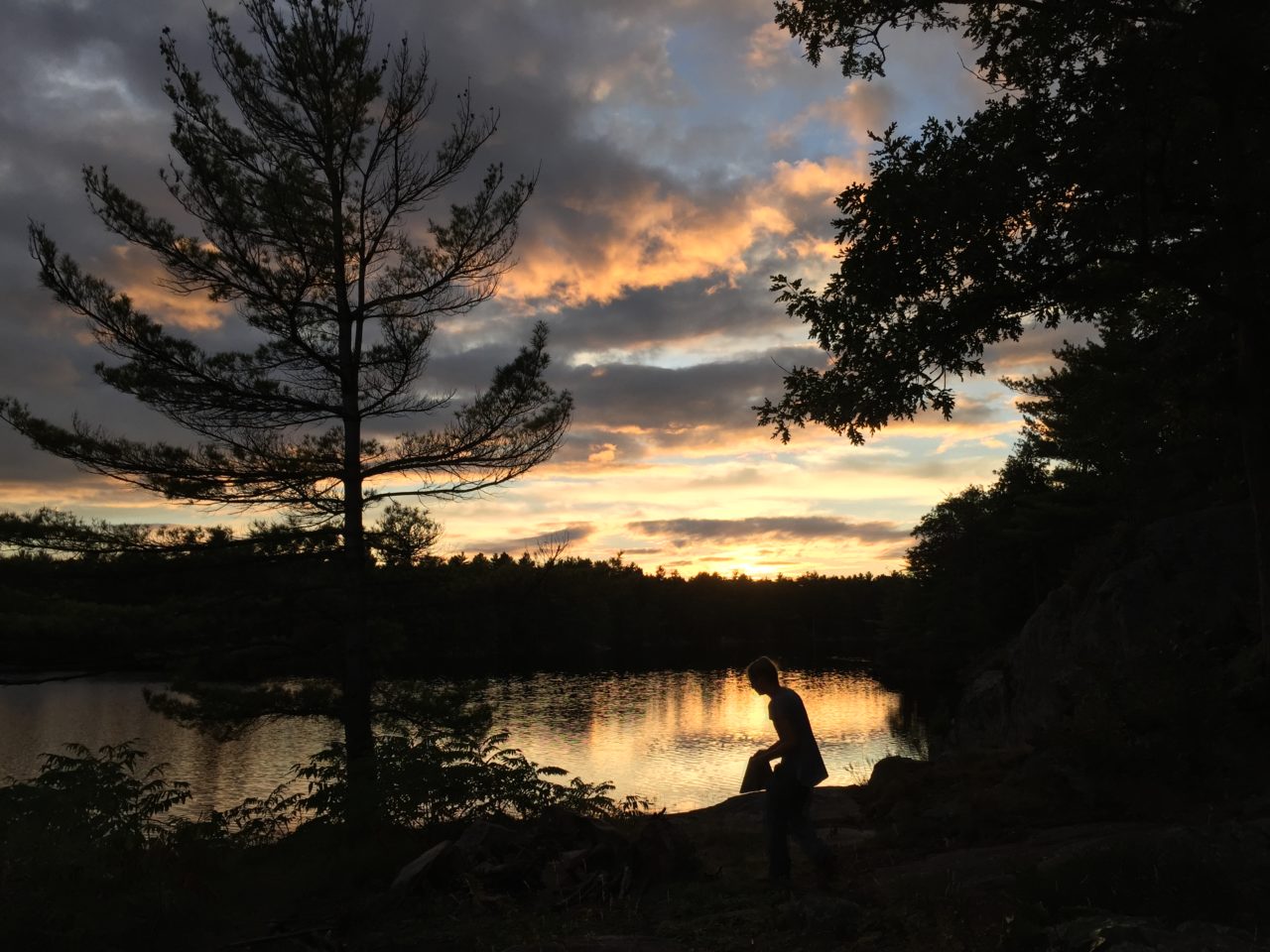 setting up the oven

Andrew had been coming down with a nasty cough and cold, and in the confines of our tent that night his germs decided to attack and invade my defenceless, sleeping body. I coughed and wheezed all night long, and when I did manage to fall asleep, I was woken almost immediately by the train that seemingly ran right behind our campsite. Sometime after midnight, it began to rain, and would continue to do so throughout the following day.

As is custom, Andrew was awake and out of the tent before me and had coffee brewing for when I emerged. I ended up making a second pot because I was so tired from my poor night’s sleep. Breakfast was a nice fruit-studded bannock (Andrew would probably be able to start a fire while scuba diving 100m below the ocean) and we hung out under the shelter of our rain tarp for a few hours, snuck out a bit to explore our campsite some more, took a few swigs of warming and medicinal bourbon whiskey, and lazily packed up our tent and gear.

On our way out, we stopped again at the Campsite Where Gear Goes to Die, in the hopes of cleaning it up a bit. We underestimated the amount of junk the first time we visited, and after filling two large plastic storage containers, crushing about fifty cans, and removing rotten tarps from the back woods, we realized there was absolutely no way we would be able to even fit it in our canoe. We always bring along a yellow Ontario Parks garbage bag (which we have never used for our personal garbage… we never have that much) and it was filled to bursting before we even made a dent in the pile of refuse. So, we neatly stashed the full bins under a tree and hoped the next group that came by would have more room – perhaps in one of those cached motorboats – and enough backcountry ethics to take it out with them.

ecosystem within an ecosystem, weir’s marsh

It was still fairly drizzly and cold out, but it just felt so nice to be back in the canoe. After completing a long trip, I always suffer from a bit of Post-Trip Depression, and beg and plead with Andrew to go out on another small journey with me as soon as we get home, so it was nice to get away only a few weeks after returning from our two-week excursion to Temagami. We certainly weren’t racing to get back to the car.

taking out the trash

During a downpour on the final portage, we milled about picking up more garbage to stuff in our overflowing yellow bag. We were able to rid the area of many decaying plastics and metals, but were forced to leave behind a giant fuel barrel that was rusting away just off the trail. The dampness and lack of sleep was starting to affect me as we paddled back under the railway bridge and past the cottages that lined the banks. Received a standing ovation and round of applause from a couple of guys hanging out on their dock (Where were those two after our 200+km voyage?!) and eventually made it back to Morrison Landing, where I proceeded to throw the yellow bag into a large bin, run to the car, and blast the heat as Andrew put the canoe on the roof and threw our gear in the trunk.

We will definitely be going back to explore more of the area surrounding the Severn River. It was a perfect weekend backcountry getaway, and there are many other lakes with camping possibilities nearby. The accessibility and lack of fees is very appealing, and it’s nice to realize that there are still wild places in the backyard of the big city. Next time, however, we will come better-equipped to deal with the mountains of trash left behind by those who have gone before us, and hopefully we won’t be infected with some disgusting extinct mining disease that leaves us coughing and breathless in our tent.

EPILOGUE:
A week later, and I still have a horrendous hacking cough. Andrew has been diagnosed with pneumonia. Good times had by all!

One thought on “Weekend on the Severn River”