Winter hot-tenting is something Andrew and I have wanted to do for quite some time, but it’s taken a while to save some money for all the gear we will need. We decided to go easy on Christmas presents for each other this year, and instead put that money towards a canvas tent and portable wood stove so we can get out and enjoy the “hard water” season. Our tent, the Alaskan model from Atuk Tents in Quebec has arrived, and so has our Kni-Co Packer stove, but with the tent weighing in at 24lbs and the stove at 22lbs, we can’t exactly throw them in a backpack and hit the trail. The solution? Winter freight toboggans!

As we are both completely new to this style of camping, we’ve been doing lots of research on the best equipment and techniques to stay comfortable in snowy, cold conditions. I’ve read “Snow Walker’s Companion” by Garret and Alexandra Conover cover to cover three times, and I’ve been pretty active on the forums over at Wintertrekking.com, asking questions and checking out trip reports, gear reviews, and DIY projects. There was no way I was going to sew our winter tent – I’m much too impatient for a finicky project like that – but Andrew is extremely handy, so we decided to save a couple bucks (really, not much more than that, because materials are so expensive) and build our own toboggans to haul our gear on.

one toboggan blank, ready to be sliced; one beginner woodworking student, anxious to learn

The first step was to purchase the materials for our toboggans. We went with the best option available: Ultra High Molecular Weight Polyethylene (UHMW for short), which we purchased from Johnston Plastics in a 48″x120″ sheet at a thickness of 1/4″ and a jaw-dropping price of $409 including tax. We had them cut this giant slab into three toboggan-sized pieces, each 16″x120″, and Andrew managed to wrestle these slippery over-sized cutting boards into the back of his work truck to transport them to the workshop. When I say slippery, I mean it. This stuff is as non-stick as Teflon. I walked on it in my socks and almost wiped out. Even picking it up and moving it is tricky, and not just because it’s a bendy 10 ft long slab. This means it should glide over ice and snow with no problems, which is exactly what we want when we’re pulling hundreds of pounds of gear into the bush!

Once the slip’N’slides were at the workshop, we began measuring out the dimensions of our sleds. We chose to taper the ends by 2″ at the front hauling end and 1 1/4″ at the back to allow for easier maneuvering through the woods and to prevent dragging of the edges through snow. Andrew rigged a jig on a straight edge to the plastic (held on with clamps lined with sandpaper – this stuff is just so damn slick) and sliced off the edges with a circular saw. I stood around looking the part in a pair of Carhart overalls and a white supervisor hard hat, feeling a bit useless. After the tapers were created, I took a small hand plane to the edges of the sleds to smooth them out and reduce snags and friction. Sandpaper doesn’t work on this material, it’s just too hard and dense and slippery. 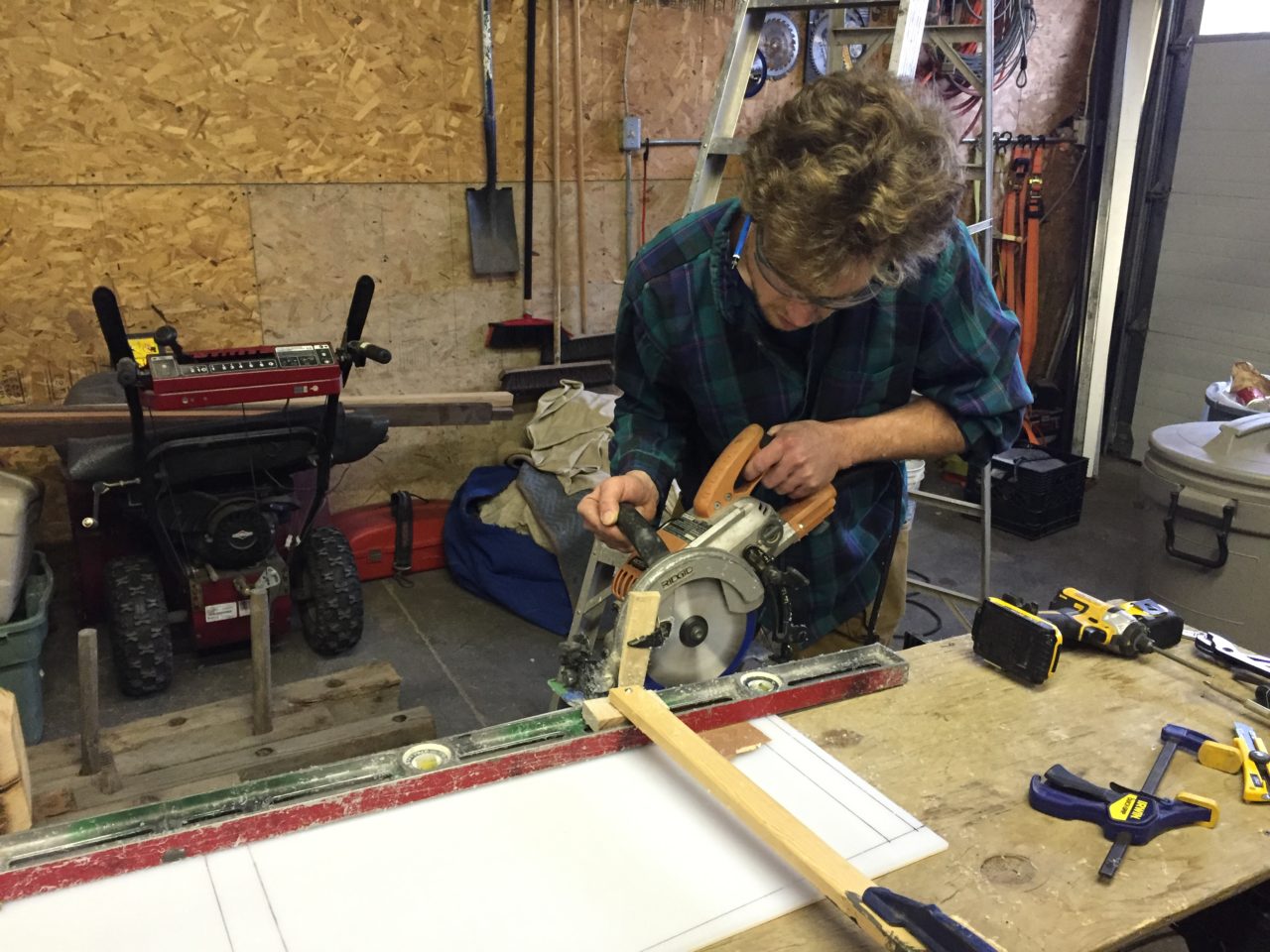 andrew rigged a jig while i danced one

With the edges smooth, we began to create crossbar pieces for the toboggans. We wanted to use a really hard, strong wood, and as Andrew does many high-end window and door installations, we had quite a nice supply of mahogany trim lying around the shop which would suit our purpose perfectly. I wouldn’t recommend using mahogany unless you have some lying around. It’s one of the most expensive woods you can buy, and not exactly the most ethical, either, as it grows in rainforests which are being obliterated by clear-cutting. However, this was scrap, and we are repurposing it.

left: one routered and sanded crosspiece, right: routered but not yet sanded

We found some pieces that were 1 1/2″ inches wide by 3/4″ high, and Andrew used a router to make nice smooth, rounded edges on all of the bars. He then cut the pieces for specific placement on the toboggans. The front ends, with the 2″ taper, are 12″ long, so for that bar we went with a piece 11″ long (1/2″ gap on either side of the plastic base) with a 4 degree angle to fit the taper. The back ends of the toboggans with the 1 1/4″ taper were 13 1/2″ long, and the bar was cut to 11 1/2″ with a 2 degree angle on the edges. The other crosspieces that needed extremely strong wood, the pulling bar and the bar to hold the front curl lashing, were also cut to have a 1/2″ clearance on either side of the sleds. We think this will minimize catching of edges in deep snow or around tricky corners while hauling. Once the pieces were routered and cut down to size, I used a palm sander to smooth the bars, which took quite some time because mahogany is such a hard, strong wood. I then took some fine (220 grit) sandpaper to finish them further. Didn’t even chip my nail polish.

After that, we decided to call it a night. The next step is to counter-sink the screw holes in the bars and sled, drill holes for the running lines, and treat the wood. We will be treating the mahogany with a 50/50 mixture of mineral spirits and tung oil initially, followed by subsequent treatments where we will enrich the mixture with more tung oil until we are applying only oil and the wood has soaked it all up. Then, assembly!